Pep Guardiola said his Manchester City side had taken a “big step” towards securing a third Premier League title in four years after opening up a 17-point lead at the top of the table with a 2-0 win at Leicester on Saturday.

A rare goal from Benjamin Mendy and Gabriel Jesus’s strike on his 24th birthday mean City just need just 11 points from their remaining seven league games to be crowned champions.

“It is a big step to winning the Premier League,” said Guardiola. “The Premier League is the nicest competition (to win), it is 11 months and it is so tough. We are close.”

Winning the league is not the limit of City’s ambitions this season as they remain on course for the first ever quadruple of Champions League, Premier League, FA Cup and League Cup in English football history.

The Champions League has been Guardiola’s one failing during his five years in Manchester, having never progressed beyond the quarter-finals.

City will have another shot at getting beyond the last eight when Borussia Dortmund’s travel to the Etihad for the first leg of their quarter-final tie on Tuesday.

And Guardiola showed that competition remains the priority with his team selection.

John Stones, Joao Cancelo, Ilkay Gundogan and Raheem Sterling were among the star names left on the bench after their exertions on international duty over the past 10 days.

“You never know after an international break but I trust my players,” added Guardiola. “The players don’t always believe me but I like every one of them. Today I trust some of my players who haven’t played for a while.

“When you are winning, winning, the guys who play know they have to play good to play again. There is good solidarity between the players.”

The visitors were still dominant against a Leicester side that had lost just twice in their previous 16 Premier League games.

“Overall the best team won. The best team in the league this season,” said Leicester boss Brendan Rodgers. “We tried to fight the best we could with the players having been away.”

Sergio Aguero was given a rare start up front just days after the Argentine announced his glorious 10-year stay in Manchester will come to a close at the end of the season.

However, his presence denied City an early opener when Fernandinho’s long-range strike arrowed into the bottom corner only for the goal to be disallowed as Aguero was standing in an offside position in front of Kasper Schmeichel.

City’s dominance of possession and patience was finally rewarded just before the hour mark from an unlikely source.

Riyad Mahrez stung the palms of his former teammate Schmeichel. But from the rebound, the ball fell at the feet of Mendy, who cut onto his weaker right foot and scored just his second goal in four seasons as a City player.

Guardiola could then afford the luxury of introducing Sterling as Leicester had to open up and chase an equaliser.

And the England international created the killer second goal as he was released in behind by a brilliant pass from Kevin De Bruyne before squaring for Jesus to tap home.

Leicester still enjoy a seven-point advantage over fifth-placed West Ham in the race for a top-four finish and Champions League football next season.

But Rodgers admitted they face a nervy end to the campaign to ensure they avoid falling out of the top four at the business end of the season like they did last year.

“We’re not in the top four until the 38th game of the season,” added the Northern Irishman. 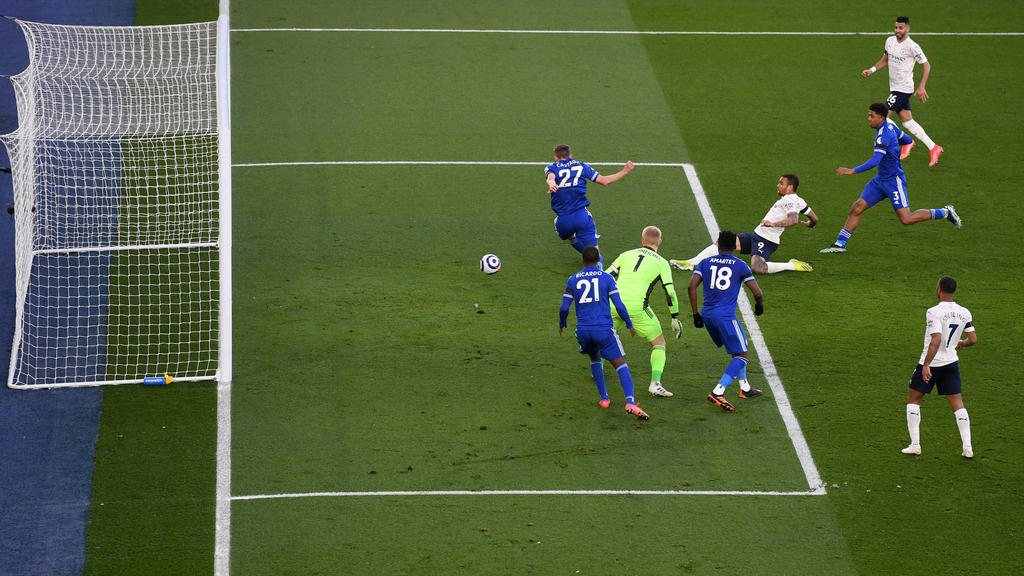