Bruno Fernandes scored a hat-trick and Paul Pogba provided four assists as Manchester United thrashed Leeds 5-1 at a packed Old Trafford on Saturday to get their Premier League season off to a flying start.

In front of 73,000, the biggest football crowd in the United Kingdom since March 2020, United ran riot with their two midfield maestros sparking hope of a challenge for a first league title since Alex Ferguson retired as manager in 2013.

Fernandes gave the home side a deserved half-time lead, but Leeds levelled early in the second-half through Luke Ayling’s stunning strike.

However, with Pogba in scintillating form, United were not to be denied as the Frenchman teed up Mason Greenwood, Fernandes and Fred, while Fernandes completed his first United hat-trick in thumping fashion.

“People talk about the quality of Paul, but his quality is not in discussion,” said Fernandes. “We know what he can do and today he showed that. He’s an important player for us.”

Ole Gunnar Solskjaer’s men finished a distant second to Manchester City in the Premier League last season with any hope of a title challenge undone by their poor record in front of an empty Old Trafford.

The Theatre of Dreams was transformed into a cacophony of noise by a full house, which resulted in a similar transformation on the field from United.

The home fans were on their feet even before a ball was kicked to welcome Raphael Varane as the French centre-back was paraded on the pitch following his arrival from Real Madrid for a reported £40 million ($55 million).

Varane was not registered in time to make his debut, while United’s other big money signing of the summer Jadon Sancho started on the bench.

“We know the quality of the players who have come in, but the team was already very good. We showed it last season,” added Fernandes. “We didn’t win trophies, but the team was growing up. We’ll achieve something with this mentality.”

United were also without Marcus Rashford and Edinson Cavani, but that allowed Pogba to thrive in his favoured role on the left of a front three.

The 28-year-old has again been the source of speculation in recent weeks after starring for France in an otherwise disappointing Euro 2020 for the world champions.

But Pogba finally produced his international form for United as he surpassed his tally of assists for the entire 2020/21 league season inside 90 minutes.

Pogba’s dinked ball over the top perfectly picked out Fernandes to open the scoring on 30 minutes as Illan Meslier could not keep out his powerful effort despite getting his foot to it.

Leeds were lucky to go in at half-time only one goal behind and looked to have regrouped at the break when they levelled in stunning fashion three minutes into the second-half.

Ayling strode forward from right-back to unleash an unstoppable effort from 25 yards into the top corner for his first ever Premier League goal.

However, the jubilation of the travelling Leeds support was short-lived thanks to Pogba’s vision four minutes later.

Greenwood was the recipient of the defence-splitting pass this time as he sprinted clear of Pascal Struijk and fired accurately in off the far post.

Fernandes then slotted home his second of the afternoon from another Pogba pass before completing his first United hat-trick in style with a thumping finish into the roof of the net from Victor Lindelof’s long ball.

Pogba’s fourth assist of the afternoon teed up Fred to slot home a rare goal from the edge of the box.

Solskjaer could then afford the luxury of handing Sancho his debut with the game won as the £73 million winger and Anthony Martial were introduced for the final 15 minutes.

They could not add to the score, but United’s work was already done as they sent out an early warning to their title rivals. 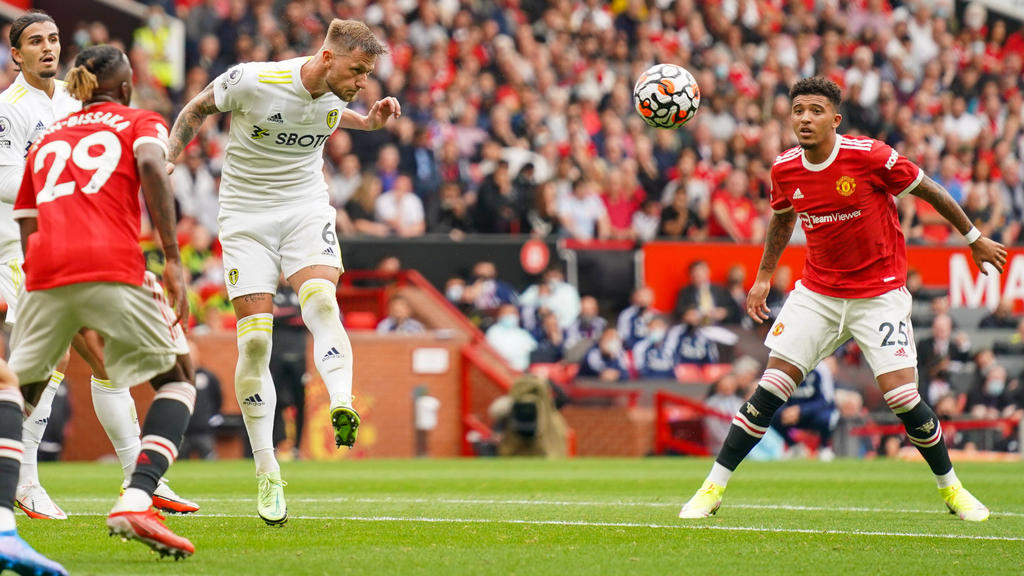